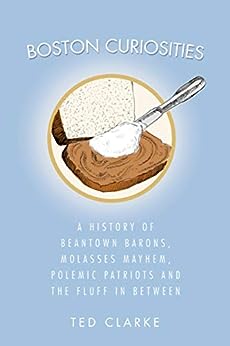 A collection of odd and obscure moments in Boston history, starring colonists and criminals, baseball players and barmaids, and many more.

Boston has been a favorite backdrop for novels, films, and television series, but some of the best stories about the city are true ones. Historian Ted Clarke explores these stories, both the familiar and the obscure, that have earned Boston such nicknames as “the epicenter of American crime fiction,” “the cradle of liberty,” and “the ice cream capital of the world.”

The fifteen-foot tidal wave of molasses that roared down Commercial Street in 1919 is one of the more famous legends. Lesser known, but equally stunning, is the case of Albert Tirrell, who in 1845 murdered his mistress in a Boston boardinghouse but was released after presenting the first successful sleepwalking defense in the United States. From the mysterious story of John Jacob Loud, who patented the first ballpoint pen, to the dubious early enterprises of merchant prince turned philanthropist Thomas Perkins, Boston Curiosities offers up a medley of memorable events that give Beantown its celebrated flavor