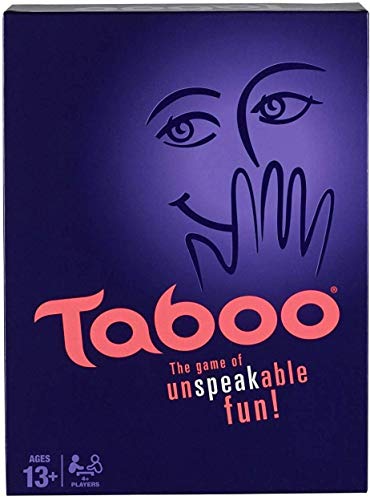 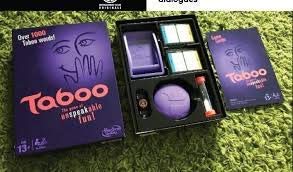 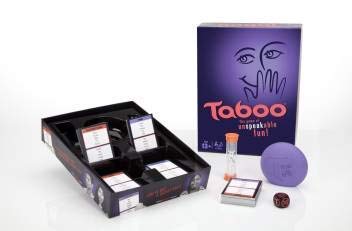 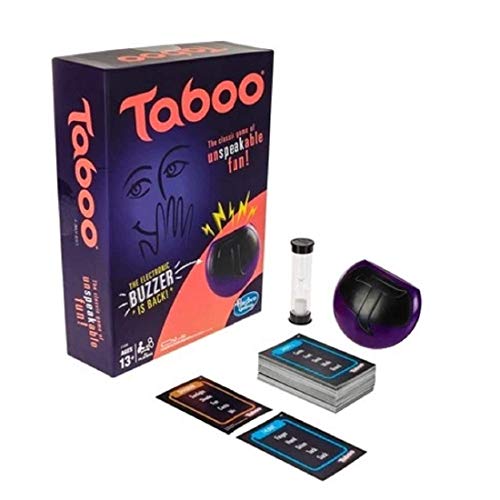 The Taboo game is the game of unspeakable fun! Who can get their teammates to say “Brain Freeze” without being able to say Ice Cream, Headache, Eating, Cold or Fast? When playing the Taboo game, the obvious clues are strictly forbidden. Players race against the timer as they try to give creative and carefully-worded clues to get team players to guess words fast. But don’t mention unmentionables, or it’s time for the squeaker, which means losing the point. Players can also play using the Game-changer die to mix things up. If it lands on One Guesser, only one teammate can guess on their turn. With 4 other possibilities on the die, players better be shrewd, quick-thinking, and willing to take some risks – but don’t get shut down by the squeaker! Enjoy classic Taboo gameplay for game night with the family and with friends. Taboo Taboo, the laugh out loud, out-of-your-seat game of forbidden words. In the Taboo game, you need to get your team to guess the secret word, but the obvious clues are strictly off-limits. To get your team to say pinball, would you say arcade, game, flippers, tilt or roll? In this game you can’t because all of those words are strictly forbidden. Get your team to guess as many words as you can while you race against the clock. But watch out; if you say a forbidden word, the other team will “squeak” you and you lose the word. Taboo can provide tons of fun and keep you sitting on the edge of our seat. You want your team to say the guess word on the card, but you can’t use any of the forbidden words in your clues. Get ready for hilarious moments as you race against the clock to give your team the best descriptions and clues possible. If you say a forbidden word, you’ll get interrupted with the squeaker and lose your turn. Are you ready for some nail-biting excitement and quick thinking?
Lots Of Guess Words: The Taboo game is a great party game to play when friends are together! It includes 260 cards with over 640 Guess words
Includes Squeaker: Oops! Say a forbidden word and get the squeaker in this super-fun guessing game for families and kids over 13 years of age
Race Against The Timers: The suspense builds as players race against the timer in this fun and fast-paced party game
Game-Changer Die: Game-changer die lets players change up the game. Get ready to be quick-thinking, take some risks, and have lots of laughs